The Ankeny Veterinary Clinic is a full service animal healthcare practice specializing in the treatment of mammalian companion animals. Our principal focus is the health and well-being of your pets through reactionary care as well as preventative medicine. It is our mission to create long-lasting relationships with clients and patients by fostering an atmosphere of trust and compassion coupled with the highest quality animal care. At the Ankeny Veterinary Clinic we treat you and your pets like members of the family because YOU ARE members of the AVC family. If you’re in need of quality animal healthcare, an appointment for one of your pets, or an answer to some animal health related question/concern, contact us today. We can’t wait to meet you and your furry companions!

Dr. Dennis Riordan received his Doctor of Veterinary Medicine degree from Iowa State University in 1981. His interest in animals was inspired by his father, Robert, a Des Moines veterinarian, and his mother, Elizabeth, who tolerated the many critters brought into the house. He wasn’t the only one in the house with an animal aptitude as 2 of his brothers are practicing veterinarians, one of whom he works with at Ankeny Veterinary Clinic (Dr. Terry Riordan). His professional interests include small animal medicine and surgery as well as zoo and wildlife medicine. Dr. Riordan was the consulting veterinarian at Blank Park Zoo for 18 years while he was practicing at Riordan Pet Hospital in Des Moines. He has practiced at Ankeny Veterinary Clinic since 2004.
His interests outside of practicing veterinary medicine include wildlife photography (some of his photos are displayed in the clinic waiting room) and wildlife conservation. He has been active with the reintroduction of osprey and peregrine falcons into the native habitat of Iowa. He enjoys consulting with the DNR regarding wildlife issues. He has lived in Ankeny since 1999 with his wife Carolyn (the practice’s business manager) and their 3 children, Conor, Deaglan, and Fiona, as well as their multiple pets. Along with supporting many Ankeny community activities, family time often involves camping, hiking, and bike riding. 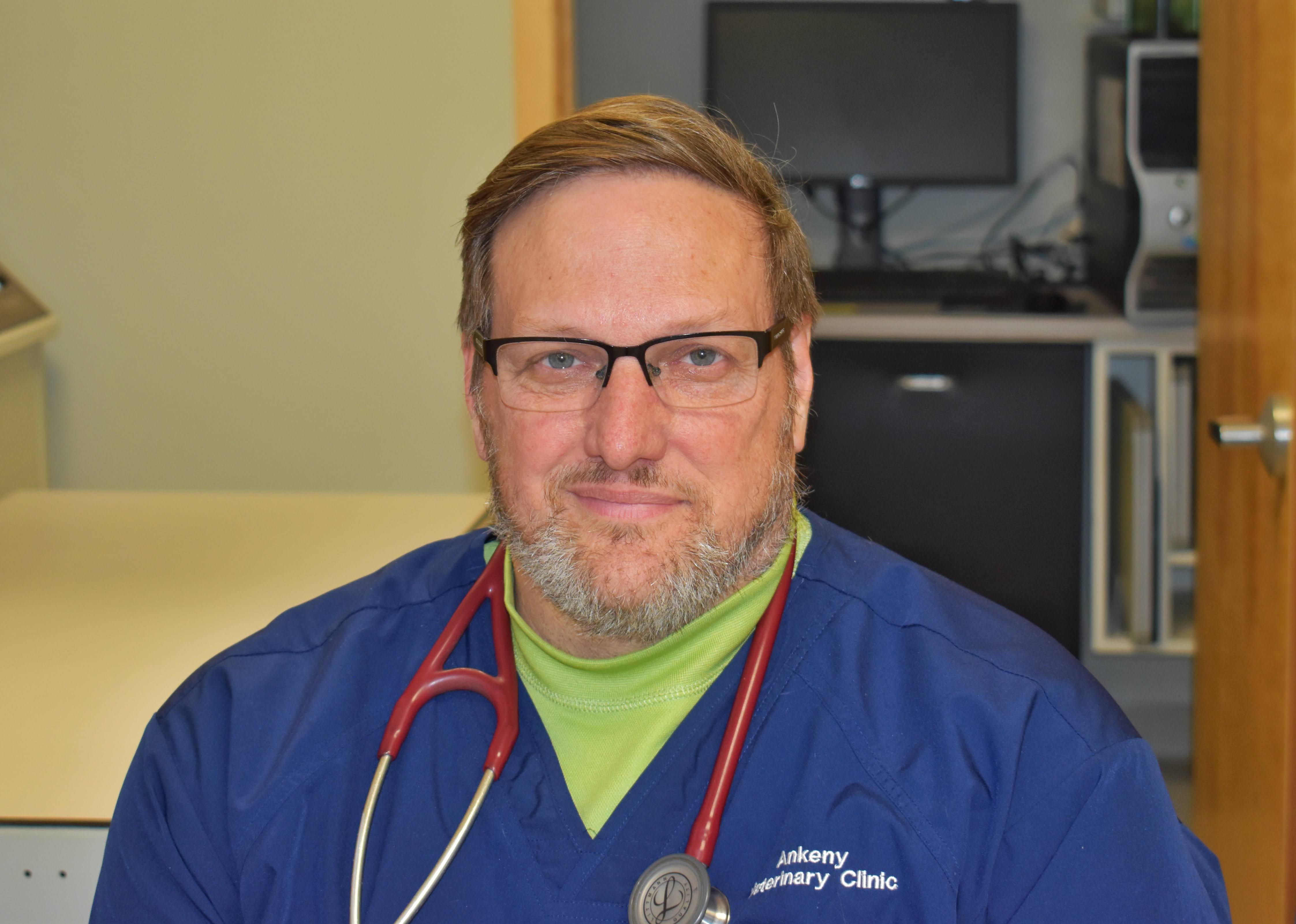 Dr. Terry Riordan followed his grandfather, father, and two brothers into the veterinary profession. After graduating from Iowa State in 1990 he practiced in Phoenix, Arizona for 13 years. During that time he served one term on the Board of Directors of the Arizona Veterinary Medical Association (AzVMA). He also served on the Executive Board of the AzVMA as Secretary/Treasurer and Vice President. For 13 consecutive years he was a member of the Arizona Academy of Veterinary Practice which requires a minimum of 50 hours of continuing education per year to be a member. In 2003 he was granted the Veterinary Service Award from the AzVMA for his contributions to the profession. In September 2003 Terry returned to Central Iowa and joined his brother Dennis in managing Ankeny Veterinary Clinic. Since returning to Iowa he has served as Treasurer and as President of the Greater Des Moines Veterinary Association. Terry and his wife Janean have two children, Maddie and Daniel.

Dr. Barbara Broderick received her Doctor of Veterinary Medicine from Iowa State University in 1984. Her passion for helping animals started at an early age with rabbits, mice and a cat. Horses soon followed while in high school at Ames High. Barb practiced in Ames and Des Moines for 2 years following graduation before heading to Texas for a 1 year internship in a surgical referral practice. From there she spent 2 years practicing small animal medicine and surgery in Chicago before coming back to Iowa to practice in Waukee for 16 years. Barb joined the Ankeny Veterinary Clinic in January 2015 and has been enjoying her time with the Ankeny community. Her favorite hobby is spending time with her 6 adult children and 2 grandchildren. She also enjoys flying, sailing, and gardening. 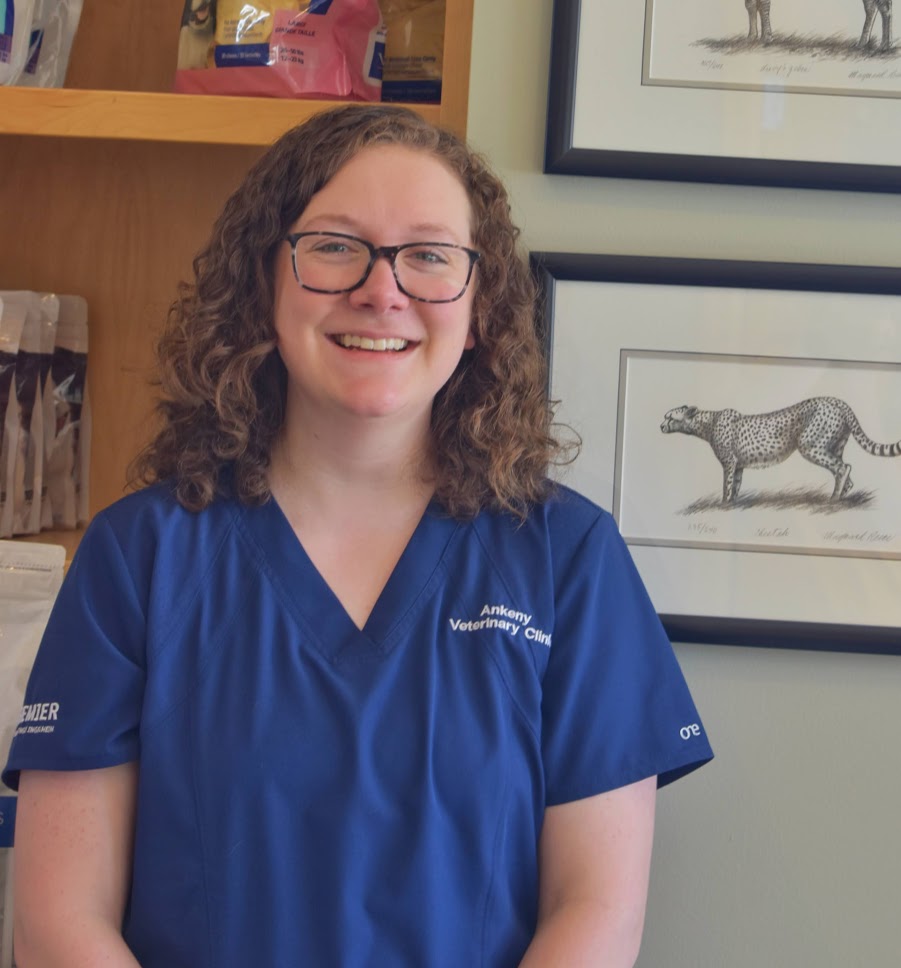 Dr. Katie Lundquist’s passion for helping animals began as a young child. She earned her Doctor of Veterinary Medicine from Iowa State University in 2018. She practiced mixed animal medicine in the Quad City area for 2 years, during which she developed an interest in small animal dermatology and dentistry. Dr. Katie returned to central Iowa and joined the Ankeny Veterinary Clinic in January 2020. She enjoys getting to know clients in the community and working alongside them to help their pet feel their best. Katie, her husband Matt (also a veterinarian), and son Reece enjoy spending time with their many 4-legged family members (dogs Nellie and Kaia, cats, and a horse). Her hobbies include gardening, fishing, horseback riding, reading, and crafting.

Dr. Kurtis Garton received his Doctor of Veterinary Medicine from Iowa State University in 2013. While earning his degree, Dr. Garton worked at Riordan Pet Hospital as an assistant for 7 years. After graduation he moved to northern Missouri and worked in a shelter that doubled as a low cost clinic for the surrounding community. While there he developed an interest in surgery and wildlife rehabilitation. After working for a year and a half he was presented with the opportunity to move back to Des Moines, his hometown. Dr. Garton was excited to be working with the Riordans once again. He works full time at Riordan Pet Hospital but helps Ankeny Veterinary Clinic when needed.
During his time spent outside of work Dr. Garton enjoys time outside with family and his two dogs Avery and Willow. His hobbies include fishing, hunting, camping, kayaking, scuba diving, and hiking. 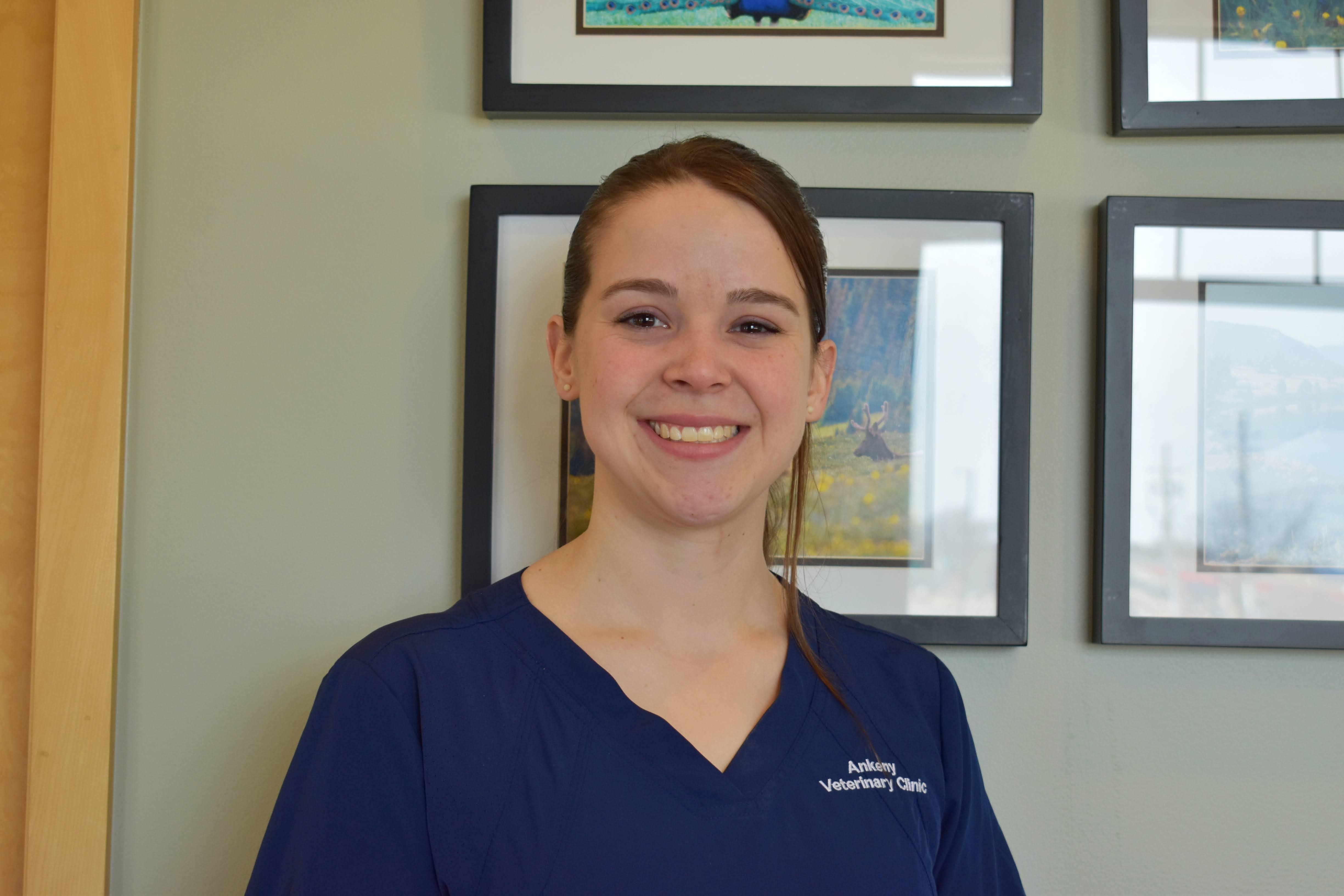 Leah started out at Ankeny Veterinary Clinic as kennel staff in 2014. After a couple months she started to help part time as a Veterinary Technician. She began to attend the Des Moines Area Community College Veterinary Technician program in 2015 and continued working at the clinic. In 2017, after graduating DMACC veterinary technician program and passing her State and National exams, she started working full time as a veterinary technician. She also fixes any computer issues the clinic has.
Leah loves working with animals and helping them anyway she can. She also does hospice pet therapy with her dog, Frankie. Her and Frankie love bringing joy to anyone they can 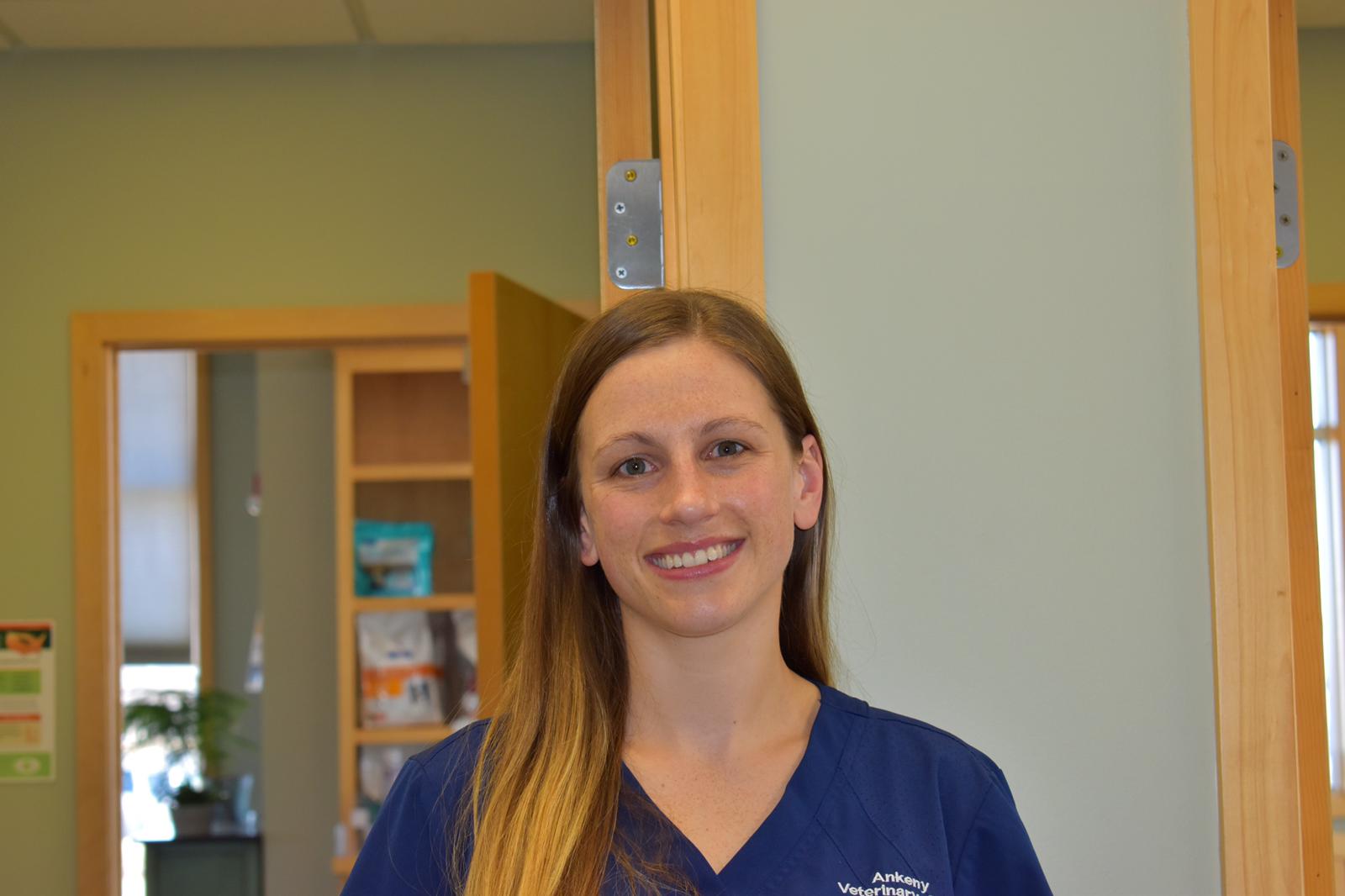 Molly grew up riding horses, competing in rodeos, and showing market steers. She graduated from Briar Cliff University with a Bachelor of Arts degree in Music in 2013. She then went back to school and graduated from DMACC to become a Veterinary Technician. She joined the Ankeny Veterinary Clinic staff in 2016 and became a Registered Veterinary Technician in 2017. Molly still enjoys riding horses when she can. She has no pets of her own yet, but looks forward to owning a dog someday. Her hobbies include singing, dancing, strength training, and cycling. 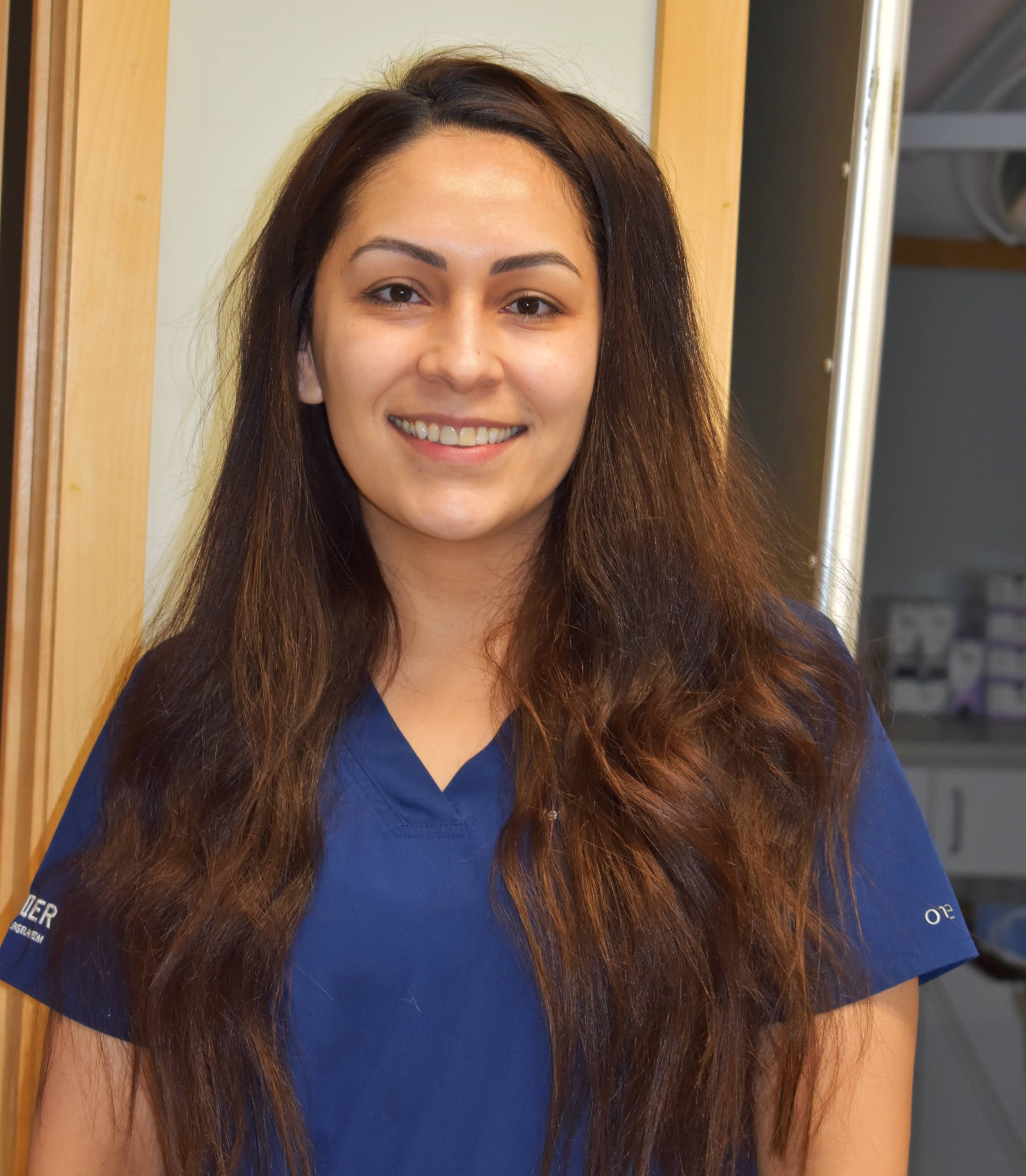 Gracie has been with our clinic since 2019. She graduated from San Joaquin Valley college with AA animal science. She has been a veterinary technician since 2010. Gracie is originally from northern California. She loves being there for pets and their owners during difficult times. In her free time, she spends time with her family and two dogs. 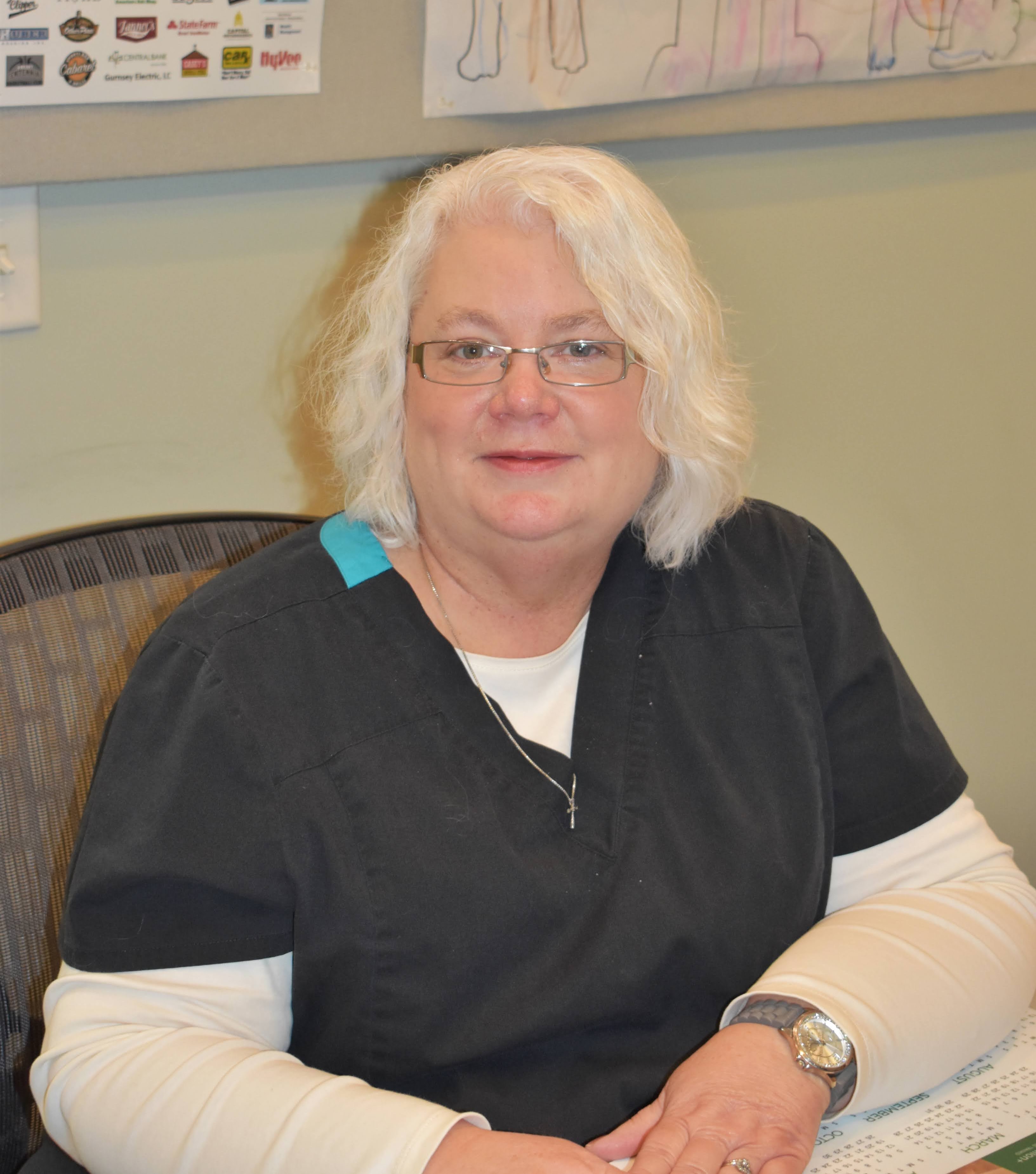 Florrie retired from Bank of America after working there for 37 years. In 2010, she started at Ankeny Veterinary Clinic. She was excited to have the opportunity to work at the clinic for Dr Dennis and Dr. Terry. Florrie grew up always having pets – dogs, cats and birds. She and her husband adopted their first dog together several months before they were married 45 years ago. She has 2 daughters and 4 grandchildren. Unfortunately, she lost her dog last December. She now gets to visit her children’s pets, which include 5 dogs, 6 cats, 4 goats, 5 sheep and 10 chickens. 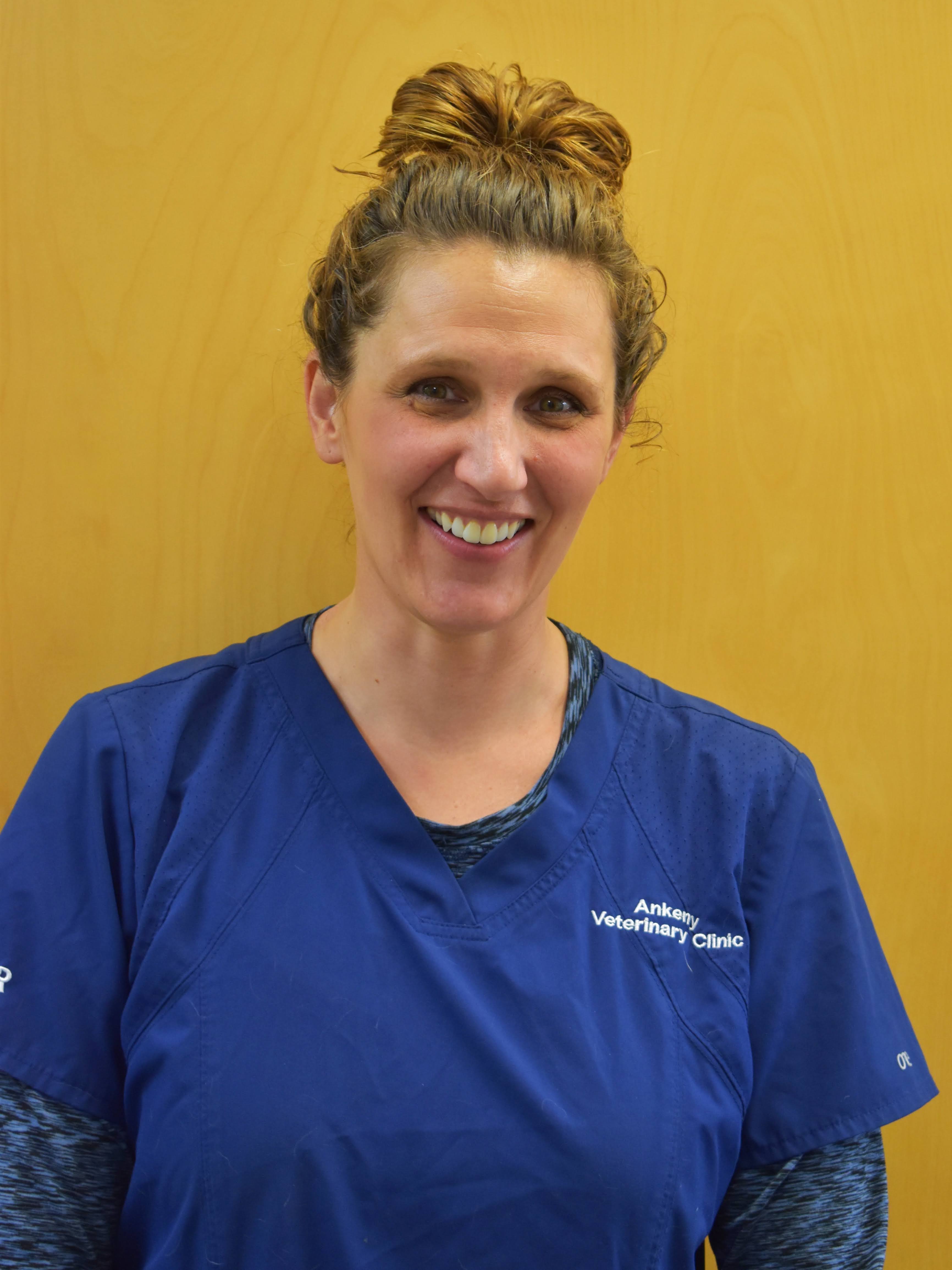 Amber grew up working at a horse training facility. She graduated from Des Moines Area Community College with a degree in culinary arts. Not using the degree, she moved out of state and worked as a breeding manager on a show horse farm. After 4 years, she returned to Iowa and was hired at Ankeny Veterinary Clinic in 2012 as a veterinary technician. She now answers phones, does the day to day ordering, and helping out where needed. She loves spending time on her farm with her 2 year old daughter, menagerie of animals (mostly rescues), and gardening. 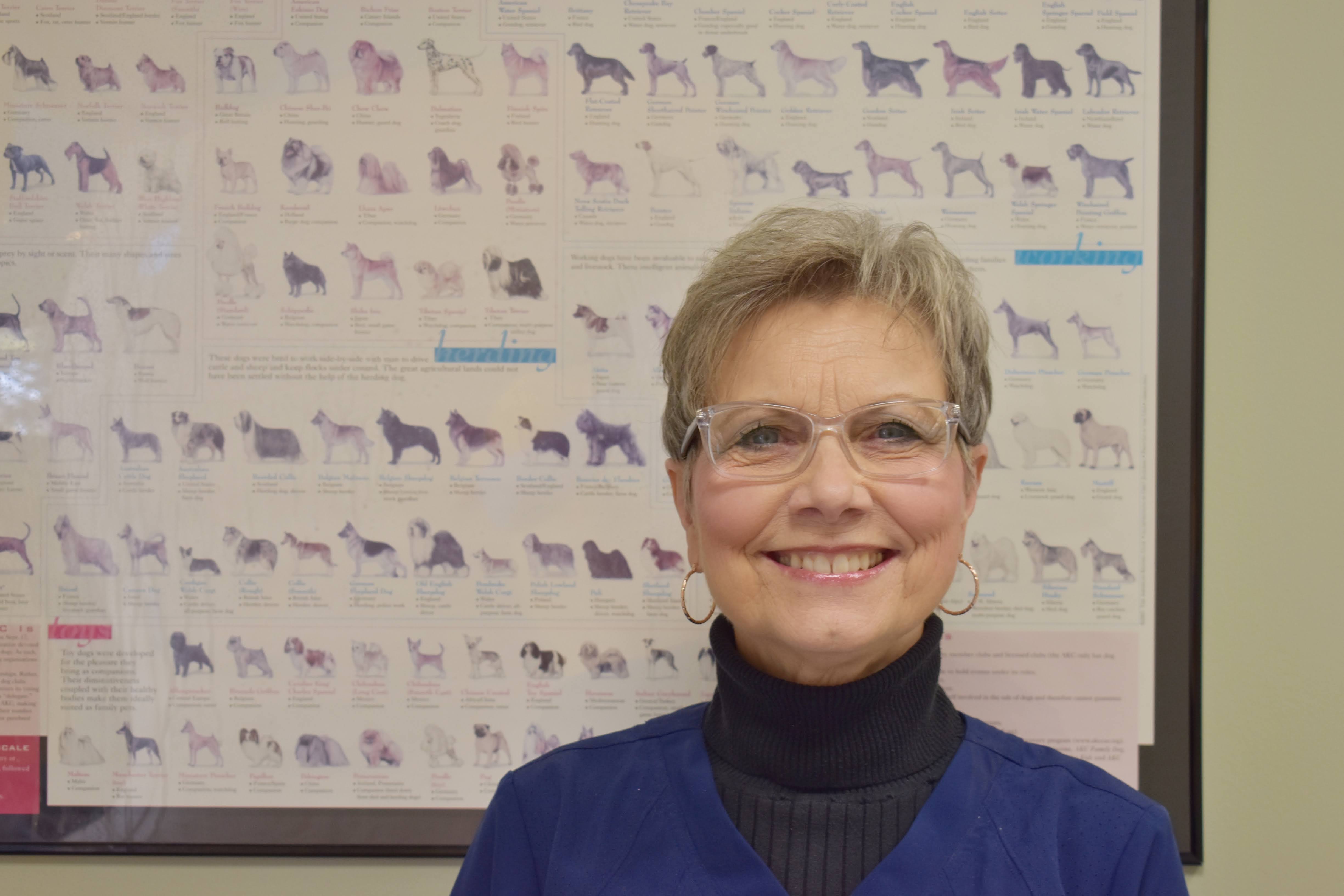 Pam has worked as a receptionist for veterinary clinics for over 25 years. She has worked for Ankeny Veterinary Clinic since September 2004. She has enjoyed being involved with the sport of showing her dogs in obedience and which all earned various titles through the years. She has also done therapy work which she has found very rewarding. She loves working with pets and their owners. She feels blessed to have met so many wonderful people and their pets through her work.
She has one son that is married and lives in Colorado and she has a sheltie named BeeGee who has obtained her Utility Dog Excellent obedience title and also her Obedience Masters 2 title. 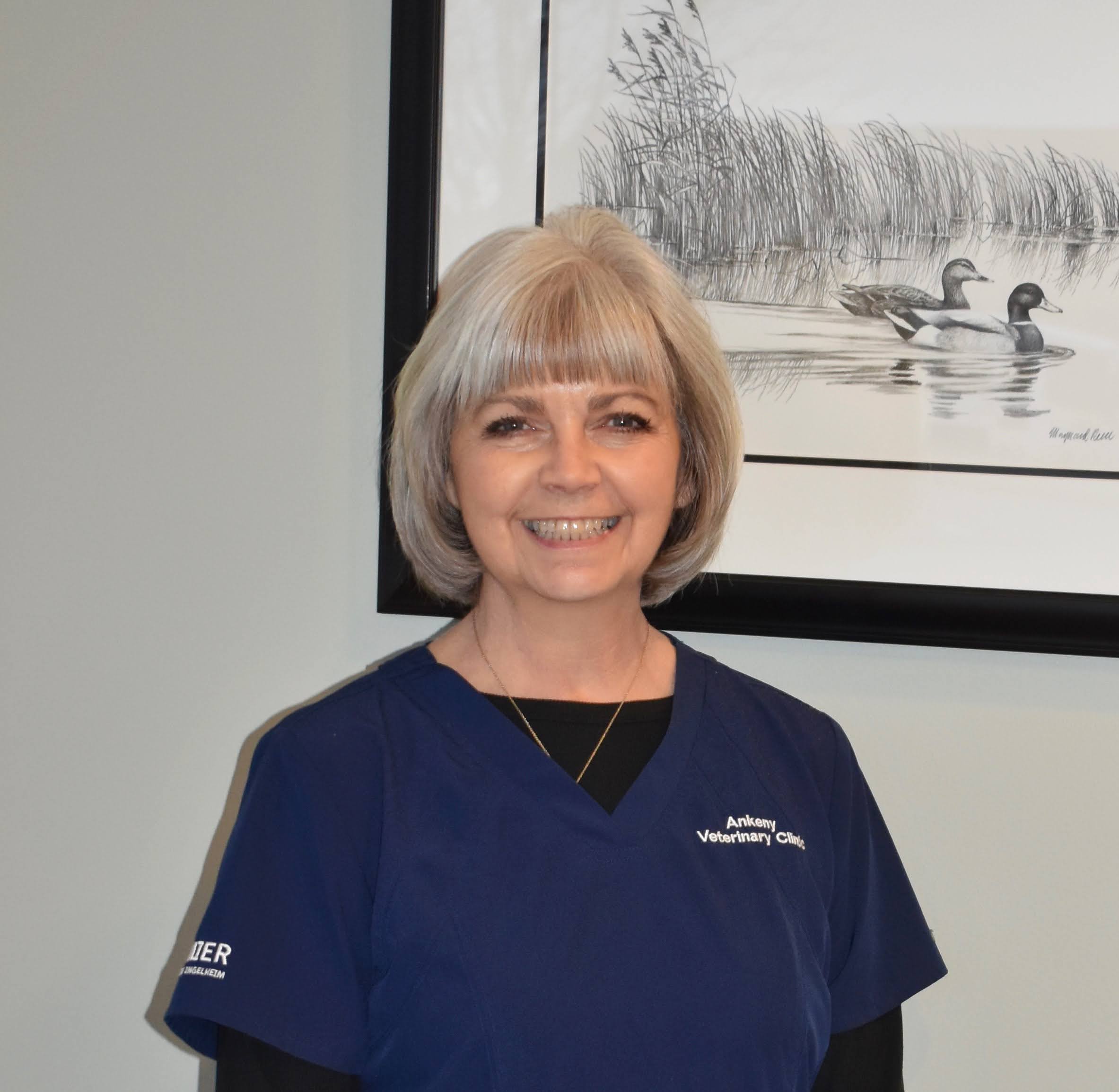 Lorna started with Ankeny Veterinary Clinic in June of 2016, took a short hiatus and was back in a flash! She loves coming to work every day and seeing the patients and their owners. Lorna feels fortunate to work with such great people and wishes everyone could be lucky enough to have puppies and kitties as part of their workday. Lorna is a member of the Society of Children’s Book Writers and Illustrators (SCBWI) and enjoys writing children’s stories as well as reading children’s books. She’s really just a kid at heart!
Lorna has two adult children, a married son who lives in Waukee and a daughter in Los Angeles. Lorna grew up on a farm but now lives in Urbandale with her happy-go-lucky English Setter Phoebe and her Ragdoll cat Indigo. Phoebe and Indy are the best of friends and would be lost without each other. Please stop in and say “Hi” the next time you’re near the clinic. 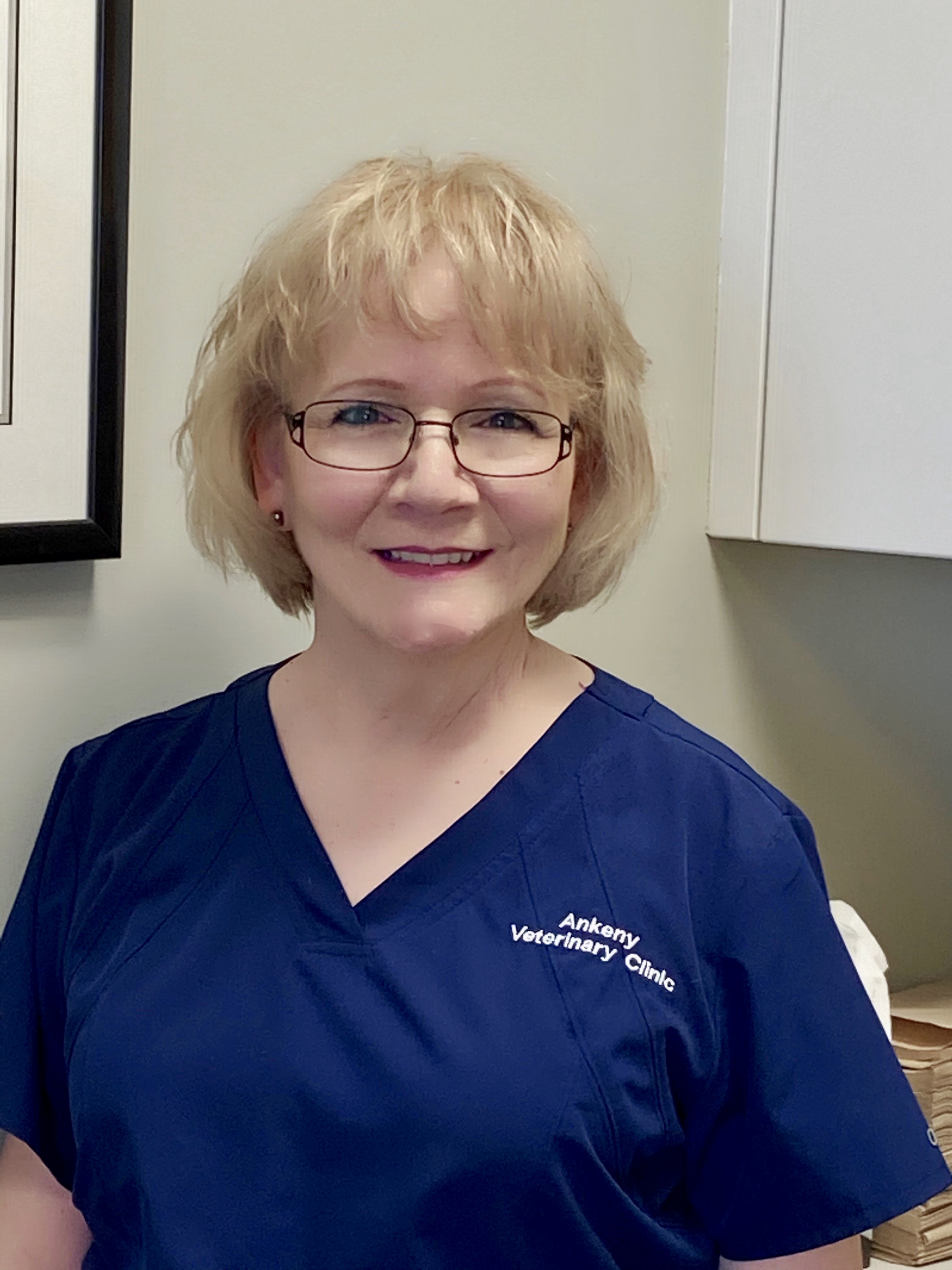 Jean began working at Ankeny Veterinary Clinic in December 2016. From 1990 until 2012, Jean worked as a Resource Case Coordinator at Mercy Medical Center working with uninsured patients and those needing disability or placement. Jean loves the atmosphere of working at Ankeny Veterinary clinic with so many caring doctors and co-workers who take care of the beloved pets in Ankeny and the surrounding community.
Jean has a married daughter, two grandkids and also a step daughter, two step grandchildren and two step great grandchildren and a Tortie cat named Autumn. Jean’s five siblings and their spouses along with extended family keep her busy as well being an administrator for a Neil Diamond website and her interest in politics.